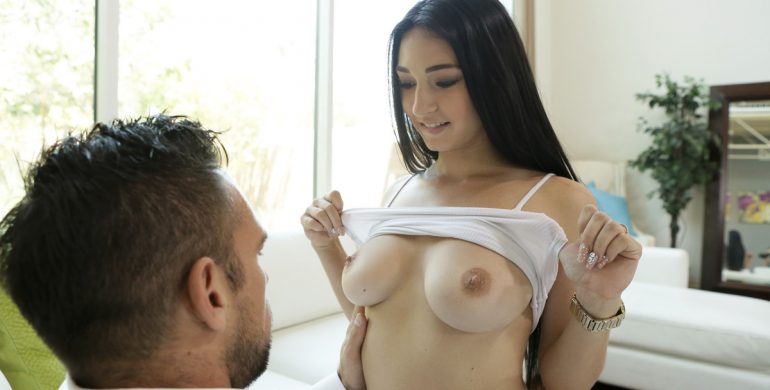 Bigtit teen Crystal Rae wants Johnny Castle’s attention, and she won’t stop until she has it. Bending over his head from behind, she smiles as Johnny nipples her braless boobs. Then she sits on his lap and lets her ladies out to play where she can jiggle her jugs right in Johnny’s face. Wrapping Crystal up tight in his arms, Johnny feasts on her titties while enjoying the feeling of a thong-clad hottie grinding against his stiffie Working Johnny out of his clothes, Crystal drops to her knees and pushes her breasts together. She leans forward with a smile, eager to give Johnny a titty fuck that will delight them both. She augments the tightness of the sheath between her breasts by leaning forward to lick and suck at the tip of her boyfriend’s dick. When Jonny gets to his feet, Crystal keeps sucking until he urges her into a new position.Laying back on the couch, Johnny pulls Crystal close so that he can feast on her landing strip twat from below. At the same time, he makes sure to spend plenty of time continuing to grope her bouncing bosom.

What a handful Tessa Fowler is!

This is how you should wake up in the morning!